A common understanding among all electric utility reform efforts is that significant investment in our energy infrastructure is needed. In today’s age of flattening electricity demand, expanding DER integration, carbon constraints, cybersecurity and physical threats, and cheap natural gas, electric utilities can no longer rely on building new central generating plants and selling more and more kilowatt-hours to generate profits and support the cost of maintaining and improving the system.

These realities are fundamentally changing the way that electric utilities will be operated and regulated, and several states, like New York, Minnesota, Massachusetts, and Hawaii, have begun investigating how to prepare for and guide this evolution. At the forefront of this discussion are important issues like how to change utility business models and pricing structures, both of which are being actively examined in New York’s REV proceeding and the stakeholder-led e21 Initiative in Minnesota. Every reform effort around the country also includes a recognition that the system of the future must continue to deliver universal, reliable and affordable service. One under-examined issue, however, is just how radically these changes will affect the most vulnerable in our communities — specifically, low-income ratepayers — and how we will protect them.

This article is an excerpt from a larger on-going research project from GW Law’s Sustainable Energy Initiative. Although we are only introducing the project in this article, the ultimate goal of our research is to highlight what policies both protect low-income ratepayers and complement the larger Utility 2.0 reform process taking place across the country.

Scope of the Low-Income Problem

According to the U.S. Census Bureau, 46.7 million people were in poverty in the United States in 2014 — nearly 14.8 percent of the population. But those numbers tell only part of the story. Generally, although each state- and utility-run low-income assistance program defines “low-income” differently, most peg eligibility to certain thresholds at or up to 200 percent of the federal poverty level (FPL) — which expands the total number of eligible enrollees for low-income assistance programs by some 10.6 million people.

In the context of energy assistance, many programs look to not only a person’s income in relation to the FPL but also his or her total “energy burden” — that is, the percentage of a customer’s income spent on energy. According to various resources, like the federal Energy Information Administration middle-income and high-income ratepayers have a one to five percent energy burden, whereas low-income customers face burdens from 10 to 30 percent or more depending on the state.

Although the above table highlights only four states, it is clear that millions of Americans struggle to pay their energy bills. And the closer a household is to the federal poverty level, the more onerous that monthly energy bill is. This problem manifests itself in millions of service terminations every year, as well as hundreds of millions of dollars in unpaid bills owed to utilities. So what policies are in place to assist low-income ratepayers, and how well are they working?

States and the federal government have various tools available to help low-income households with their energy burdens. At the federal level, two important initiatives are the Low Income Home Energy Assistance Program (LIHEAP, discussed further below) and the Weatherization Assistance Program — both of which are federally-funded grant programs administered in every state, the District of Columbia, as well as most tribal reservations and U.S. territories. State governments also have a broad selection of programs, but the primary mechanism for helping low-income individuals is through the utility rate structure itself.

Since funding began in 1981, LIHEAP has become a critical lifeline for some of the country’s most vulnerable members. However, due to budgetary constraints, LIHEAP funding has been cut considerably, from $4.7 billion in 2011 to $3.4 billion in 2014 — which directly impacts the number of funding recipients. In concrete terms, here are those same states again, when factoring in LIHEAP eligibility cap of 150% of FPL.

For each of the above states, there is a wide gap between how many households qualify for LIHEAP and how many receive coverage in the form of heating or cooling assistance. Indeed, of the roughly 28,780,463 households that met the LIHEAP eligibility requirement in 2014, only 2,985,747, or 10.3%, received assistance. So, if only a small percentage of low-income ratepayers receive LIHEAP assistance, how are the others getting by and how can we both ensure their protection in the future, and potentially broaden coverage to others in need?

Aside from programs like LIHEAP, the other policy tool for assisting low-income ratepayers is through the utility rate structure itself. Although there are about ten different categories of rate structures used by the states, they essentially all boil down to a subsidy paid for by industrial and other residential ratepayers. In essence, by imposing slightly higher rates on industrial, commercial and non low-income residential customers, utilities are able to deliver electricity to low-income customers at rates that are oftentimes below the actual cost of the electricity service.

For example, in the typical increasing block rate, higher rates are imposed on high-usage customers (read: industrial ratepayers), and rates for other customer classes also rise with consumption. 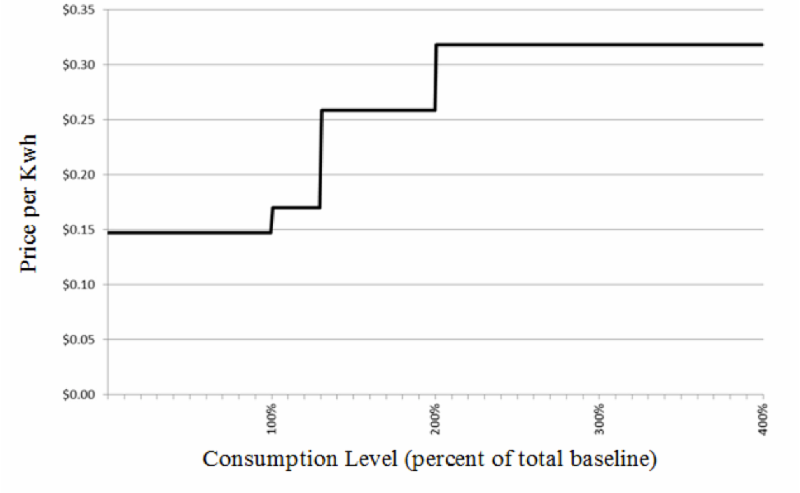 One of the criticisms of the conventional block rate utility rate structure is that it does not so much target low-income customers as low-usage customers — many of whom may not necessarily be low-income. As such, usage-based rates may be over-inclusive, thereby diverting resources away from low-income customers who, because of poor home weatherization or large household size, are not low energy users, and applying them to low-usage customers who do not require subsidization; and potentially sending false price signals that fail to incentivize energy efficiency that would be societally beneficial.

As reported in a recent Electricity Journal article, a helpful illustration of this can be found in the results of a recent study conducted by a medium-sized utility in Oregon. The utility sought to answer the question of how well low-usage corresponds with low-income, and the results were surprising. When the utility analyzed its entire residential load according to various usage categories, it found that its low-income customers were spread out among various usage levels, just like the larger residential class. With only ten percent of the utility’s total residential class being low-income that meant that the utility’s block rate structure “was helping about nine times as many customers as intended.”

To the extent that conventional utility rates worked well at subsidizing low-income customers — a disputed point, as noted above — it was primarily because such rates were implemented in an era of increasing electricity demand and grid-dependence. However, as mentioned at the outset of this piece, today’s electricity sector faces just the opposite set of challenges: demand is falling and more residential and industrial customers want to self-generate, which puts more pressure to subsidize low-income customers and maintain the entire system on a dwindling group of ratepayers.

In the coming months, GW Law’s Sustainable Energy Initiative will be exploring this issue more thoroughly and preparing a set of policy solutions. As utilities and regulators endeavor to adapt to these new realities, they will have big problems to solve: How will utilities earn revenue despite falling demand and customer-side distributed generation? What regulatory policies will be required to ensure sustainable, equitable, forward-thinking development? As new policies and regulatory models emerge from these discussions, it is also important to remember that this evolution will especially affect those in our community who are the most vulnerable to the changing status quo.